Over two weekends at the end of August Respawn Entertainment released a beta of sorts for their upcoming sequel to the Xbox exclusive Titafall. The Titanfall 2 beta, which Respawn called a “Tech Test” landed with mixed reviews from fans, we played it on the PS4 and here’s what we thought.

First of all trying to play this game multiplayer was more of a challenge than it should have been. Setting up a session with friends was quite annoying, and the selection of a network was also confusing and flawed. Once we got everyone into a team it seemed things were fine as long as the game didn’t crash (which it did), but the “Network” was a whole different story.

Upon playing solo the following day, not having anyone in my private voice chat, all of the mics in the Network went live. Suddenly I was overwhelmed with teens and preteens the world over, cursing and racially slandering one another. Worse there was no easy way to mute this setting, and the chat carried over into the actual game with a match started. The solution seemed to be to create a private Network, just to get peace and quiet.

Like most online first person shooters these days the gameplay is much more than running and gunning. We’ll get to the Titans shortly, but for a minute lets talk about upgrades. As you progress through the game you level up your Titan, weapons and character.

As you progress in level you unlock add-ons for your Titan and weapons. You also earn in game currency to buy unlocks if you don’t want to play the game and unlock them over time. These upgrades are found on the main screen of the game under the “customize” options for your pilot, titan and armory respectively. Most of the upgrades seem pretty inconsequential to the gameplay. Fast aiming, fast reloading, extra ammo and a slightly better gun sight seem the standard fare for each weapon. The Titans have a unique modifier, but it’s nothing to write home about.

There are 5 available character classes to play currently. And those seems to have been tweaked by Respawn in weekend 2 of the tech test. You can also create a custom loadout of sorts, but it’s the same as modifying a normal class. 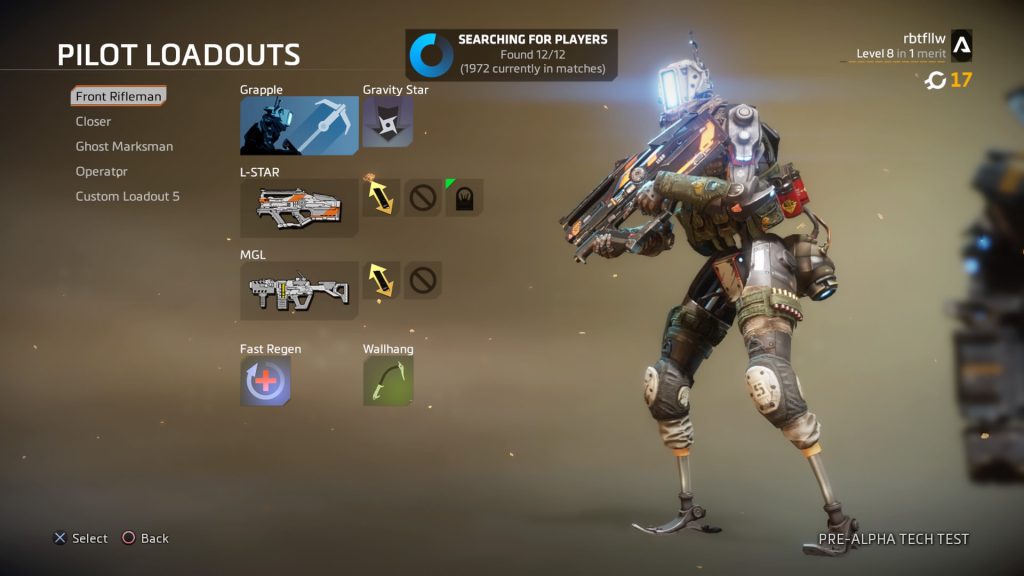 The thing about the classes that is upsetting is there is only one class that can use the grapple hook, which was a huge feature shown in all the promo videos for Titanfall 2. Respawn’s fix for this in weekend 2 was to allow any class access to any of the weapons, which were previously class-fixed. But now that you can assign any weapon to any class, there is no purpose to any class at all. So the question is why not simple have the user create a character that can switch out his ability, appearance, and weapons? Keeping the illusion of fixed classes is silly at this point. 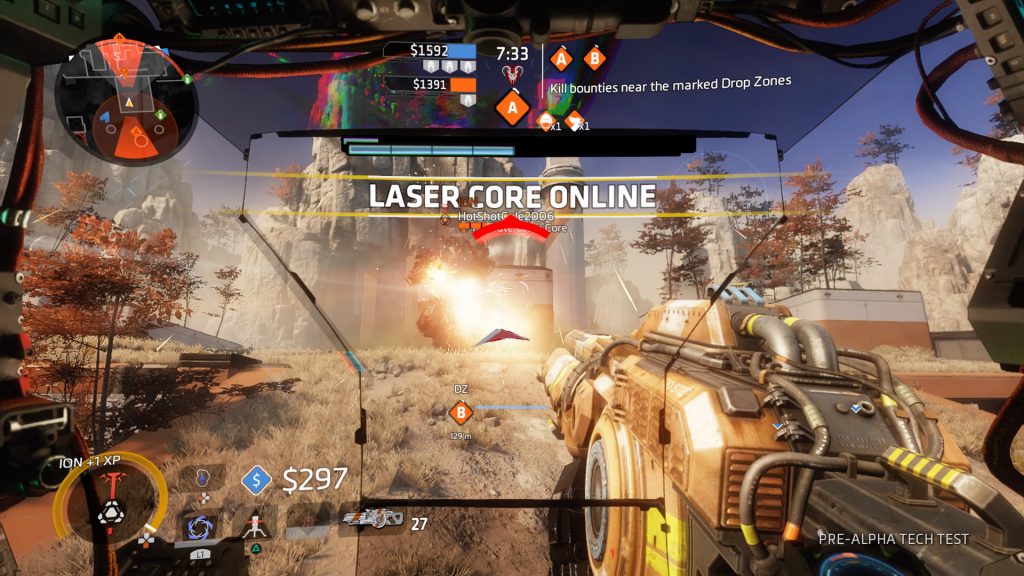 This game brags to be from the makers of the Call of Duty franchise, and it sure feels like it. In fact it feels a lot like it, to the point where I wondered if I should just go and play a finished CoD game instead of this. The run and gun is fine, but the gimmicks in the game need a lot of work. The wall running is sloppy. Often you get stuck on a surface, or run along the wall when you want to jump over it. The special class moves like the grapple have limited uses and timed regeneration, which becomes infuriating with the grapple. It seems it’s never there when you need it. And true of any CoD clone or the game itself, snipers are horribly over powered.

What should make this game different than it’s competition are the Titans themselves. I mean the game is called Titanfall right? Only thr Titans themselves can take forever to become available in game. Their spawn timer is based on points earned through capture points and kills. However if you’re not getting kills, it takes a very long time for the Titan meter to fill. And when it does and you finally get into your Titan it feels like it’s made out of paper. For instance it can take you 5 minutes to get the thing, and then you can lose it in under 30 seconds if you’re facing an opponent who has any skill at all.

At first I thought it was because I was just really bad at this game, but as I got better I found that it’s not me, it’s just a horrible game mechanic. Calling the machine in paints a huge target on you, and it’s far too easy for an enemy pilot (not titan) to take you out almost as soon as you get in the giant beast. If there are two enemy pilots I wouldn’t even get into the thing. In fact, in most cases its better if you spawn the mech in the middle of the other team and just tell it to automate itself. Which works well, but then it’s no longer you in a mech, it’s just you spawning in a mobile turret. And you know that this is a known issue when one of the three game modes is pilots vs pilots, which doesn’t allow Titans at all. Because lets face it, the whole game in every mode is pretty much pilots vs pilots anyway.

I had high hopes for this franchise, but after playing this game for two weekends I think I’ve had my fill. Here’s to hoping that Respawn takes every bit of feedback the internet has given them and implements it into the final game. The developer blamed huge player fall off in Titanfall one on a lot of different things, but I would guess this new game doesn’t come close to the initial sales number of it’s predecessor. Titanfall 2 has the potential to be great, but it needs a lot of work before relase to make that happen. A story campaign alone will not save it. I fear instead we will all be waving goodbye to the franchise that could have been.