I feel like Poe Dameron is going to be the Boba Fett of this generation of Star Wars movies. Admittedly, the ace Resistance pilot as already spoken more lines in The Force Awakens than the armoured bounty hunter did across both his original trilogy and prequel appearances, but I feel like they fill a similar niche. They’re the inexplicably cool supporting character that brings excitement whenever they’re on screen, and leaves fans wanting more.

That being said, I was justifiably excited when I saw that Poe would be the first new trilogy character to get his own series in the new Marvel Star Wars comics universe. So far, we’ve seen these mini series for some of the key original trilogy characters like Lando, Chewbacca and Leia, as well as currently being in the middle of a series featuring Obi Wan and Anakin taking place somewhere between Episodes One and Two. 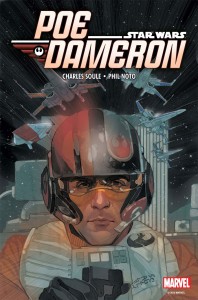 These books, along with the three monthly Star Wars titles – Star Wars, Darth Vader and Kanan – are filling in parts of the “new Star Wars” canon, and tell the stories that took place before and between the movies. Much like the sprawling “expanded universe” that was retconned into the Star Wars Legends universe shortly after Disney purchased Lucasfilm, these stores serve to flesh out the individual characters and, in some cases, provide context for stuff that happens in the movies.

As you might expect, the first issue of Poe’s comic does just this. Sparing specific spoilers, the comic is clearly going to be laying out the mission that led Poe to Jakku at the start of Episode VII. It also seems as if we will learn a bit more about the other pilots that make up Dameron’s “Black Squadron” that we saw in The Force Awakens.

The comic itself is a good, middle of the road book. As I’ve found with all the other Star Wars comics I’ve read so far, there isn’t anything revolutionary going on here – these are solid, fan service pieces, appealing to Star Wars fans who want more than just what the movies have to offer. The book does get bonus points for giving almost as much attention to Poe’s now-beloved droid BB-8 as it does to Dameron himself, including the awesome variant cover I picked up. 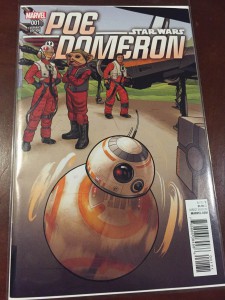 While the story itself is fairly standard Star Wars fare – Poe goes on mission, complications happen, will no doubt be resolved in future issues – the book stands out for a fairly innocuous passage that I think all Star Wars fans will appreciate.

I’m going to try to do this as spoiler-free as possible, so here we go. Midway through the first issue, there’s an exchange between Leia and Poe that really helps give context to what has happened in the galaxy in the 30 years between Return of the Jedi and The Force Awakens, specifically in relation to the Empire, the First Order and the Resistance. It’s not much, but it gave me a greater sense of where this new universe is at, in terms of the Resistance and the threat of the First Order. 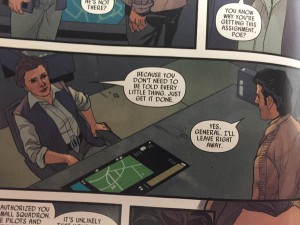 In short, this is the kind of stuff that makes me glad the comics are around. I’ve always loved that Star Wars is this big, sprawling universe full of intrigue and adventure, and I’ve never been happy with just the bits we see condensed in to the two hour constraints of the movies.

If you’re a fan of Star Wars, and especially if you liked Poe, BB-8 and The Force Awakens, this book is definitely worth giving a read.