From everyone here at Robot Follow, we’d like to welcome you all to our first review. And for us there is no better way to kick things off than to talk about one of our favourite properties, Star Wars. Specifically the new EA and Dice property, Star Wars Battlefront.

I know, we’re a little late to the game here (literally) for a review since it’s been out for months now, but we’ll be focusing specifically on the recently released DLC, The Outer Rim.

I took part in the beta for Battlefront before it was released. I was really excited for it and was blown away by some things, and really let down by others. The graphics were amazing and the gameplay was fast, but therein lie the problems. The graphics were so detailed that you inevitably got stuck on the smallest piece of scenery while playing, and usually ended up dead as a result. It had other failings as well, but the game has sold more than 12 million units to date so clearly the issues are small enough that most gamers can overlook them. When the cost of the game on PSN dropped from $90CAD to $40 over the holiday (only a short time after it’s initial release) I bought the game and was hooked in a very short time.

On March 22, 2016, EA released The Outer Rim expansion. Very shortly after I stopped playing the game altogether and here’s why: Though they did adjust some things in a good way, like the navigation on the main menu, it still leaves a lot to be desired.

For example, instead of having all the game modes thrown at you on one screen you have the option of the massive multiplayer modes that accommodate up to 40 players, the smaller group modes that take up to12 players, or the hero modes. That seems like a good idea, right? Except I keep finding myself going all the way to the right and selecting “List All Modes.” When I’m playing alone or with friends, we don’t want to look at these limited sections of what we can play, we want all the options in front of us. Think of it like being at a restaurant and having a menu for entrées, a separate menu book for starters, and a third other book for desserts. No one does that, and for good reason: it’s bloody annoying! Meanwhile, when you click “List All Modes” you are brought to a nice redesigned grid layout of all the game types, which is all they needed to do in the first place. Further, when I’m done playing a game and go back to my home screen it sure would be nice to not have to click through all the game screens again to get back to “List All Modes.”

Next we have the Hutt Contracts. It wouldn’t be The Outer Rim without that king of the underworld, Jabba the Hutt. The Hutt bounties allow you to complete in-game tasks, like the quests or bounties in Destiny, to gain access to weapons that are only available upon completing the contracts. Again, that’s cool and I can see how that adds replay to the game. In Destiny, I’ve been guilty of spending far too much time trying to complete the meaningless bounties, so I can see myself liking this feature. What makes it frustrating in The Outer Rim is finding the Hutt Contracts. Once again, the navigation in the game seems to have been designed by someone who has never played a game console before or is new to PC.

From the home screen you have to move to “collect,” then click into the menu to “unlock.” That opens another screen where you see a picture of Jabba at the middle-bottom of the screen. Clicking on it brings you to the Hutt Contracts. That is far too many clicks, especially for a new feature being added into the game. And the best part about it is I randomly discovered it while wading through the mess that is the menu system to try and find a new gun, and then I randomly discovered Jabba down there. Why didn’t the game tell me about this new feature? Does it expect me to just know about it because I read all the forums online about the new DLC? Yes, yes it does.

But let’s get into the real reason I am so very annoyed with this DLC and the new weapons packages. The new characters and levels are only available through the Season Pass, which is fine. I don’t really want them right now and I didn’t think they would change my core game experience. EA says you can keep playing the game without them and no one needs to buy the Season Pass to play the game. But is that true? When I started up the game after the DLC became available, I found myself dying a lot more than I used to. Now I’m not an MLG gamer by any means, but I’m pretty good at an FPS, and moderately alright at Star Wars Battlefront. Not that weekend however, and the reason is the new Scout Pistol card which Season Pass owners have access to, or it can be bought as part of the new Scout upgrade pack. 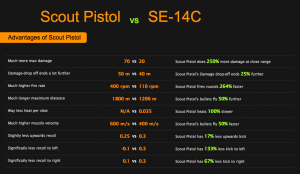 You can see in the attached graph from Symthic Game Science that this gun does 250% more damage than the SE-14C gun everyone has access to. Because I don’t want to spend another $70 on a season pass, or $6 to get this gun and a few more accessories, I’m stuck playing a game where I can’t even get a shot off before I get put down by the 4-6 players on the other team who all seem to be favouring this weapon. And that right there makes me not want to turn the game on and play it at all.

I would hope that in some near future update EA and Dice nerf the gun down to a reasonable amount of damage, but for now it really makes the game unbalanced and draws a firm line in the sand between those who do and do not have the Season Pass for Battlefront.

Though this DLC content does add reply and extra content to the existing game, it really alienates some core members of its gaming community. To anyone thinking of buying the game, my advice would be to hold off until there is some kind of Game of the Year edition which comes with the core game and all of its expansions, because right now it’s not worth your time and money, even for the most die-hard of Star Wars fans.